Ta-Nehisi Coates: Racism, Social Commentary, and the Question of Atheism 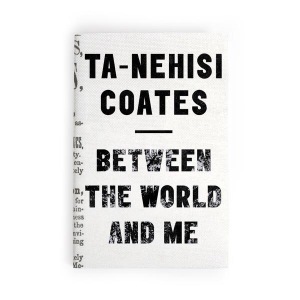 Ta-Nehisi Coates’ (2015) Between the World and Me is a book about race, particularly the lived experience(s) of fear and struggle that come with occupying a Black male body in the United States in 2015. This is the understandable media narrative that has surrounded the book’s early release. Given the ongoing violence enacted upon Black male bodies in the United States – police brutality, vigilante attitudes and actions, poverty, mass incarceration – Coates sets out to preview for his adolescent son, Samori, the world in which he lives. This is a world not of his son’s making: “I want you to know that this is not your fault, even if it is your ultimate responsibility.”

Coates is a racial realist – a term from Critical Race Theory articulated by Derrick Bell (1995), which boldly claims that “racial equality is, in fact, not a realistic goal” (p. 302). Coates does not believe that the racial realities of the United States will change, regardless of rhetoric, discourse, or politics. In many ways, this is a book seeking to protect his son against the false hopes of change, social justice, and racial reconciliation that regularly undergird historical “moments” in the United States. For me the most recent example of this narrative is removal of the Confederate Flag from the statehouse grounds in South Carolina. While I fully support the flag’s removal, the moment does little to shift racial attitudes in South Carolina or the “South” beyond removing a symbolic legacy of that racism. While the country has been reveling in self-congratulatory rhetoric surrounding the flag’s removal, we witnessed in the week following the unexplained death of Sandra Bland in Texas and the greeting of President Barack Obama in Oklahoma with confederate flag waving protesters. These are the types of racial realities I believe Coates is attempting to point out to his son.

Coates situates this racial reality within a grand historical narrative of racism/race in the United States, which he refers to as the “Dream.” The Dream is composed of other false promises and historical lies within the grand narrative of the United States – the myth of Whiteness being dominant. Throughout the book, Coates refers to people who “believe that they are white,” touching on the constantly shifting definition of Whiteness in the United States (for more on this history, see Painter, 2010). Racism is built into the fabric of our country, which is why it simply will not change. This point Coates makes eloquently at the beginning of the book: “racism – the need to ascribe bone-deep features to people and then humiliate, reduce, and destroy them” is the original sin in the United States. It is racism that led to race – “the invention of racecraft” – not the other way around. “Race is the child of racism, not the father,” says Coates, reminding readers and his son that institutional structures and power define the parameters of social identity markers (this argument could be extended to other arenas. For example, it is heterosexism that led to the creation of heterosexuality, rather than heterosexuality being something “real”).

While implementing Racial Realism we must simultaneously acknowledge that our actions are not likely to lead to transcendent change and, despite our best efforts, may be of more help to the system we despise than to the victims of that system we are trying to help. Nevertheless, our realization, and the dedication based on that realization, can lead to policy positions and campaigns that are less likely to worsen conditions for those we are trying to help and more likely to remind those in power that there are imaginative, unabashed risk takers who refuse to be trammeled upon. Yet confrontation with our oppressors is not our sole reason for engaging in Racial Realism. Continued struggle can bring about unexpected benefits and gains that in themselves justify continued endeavor. The fight itself has meaning…” (p. 308; emphasis added)

Coates believes it is the struggle that has made him who he is; that is perhaps the most we can hope for in a racist society. Continue the struggle. Relish the struggle. This is a difficult argument for many educators, social justice advocates, and others who believe in linear progress. Yet this is Coates’ position, and it is one that I believe should be taken seriously. Coates adequately situates this position within the current historical moment in the United States – where police brutality, unchecked killing, economic pillaging, mass incarcerating, and educational decimation remain lived realities for men with Black bodies.

Coates’ discussion on race and the Black male body are reason enough to read this book. However, Coates is undertaking a much larger social commentary project within the pages of this book. Several of these points deserve discussion, and likely will not be highlighted as prevalently in the public and media discourse surrounding this book.

As an educator, I found Coates’ discussions of the education system in the United States profound. “Schools did not reveal truths, they concealed them,” says Coates. He argues against the utility of academic disciplinary subjects such as Algebra, English, and science – “opportunities to better discipline the body, to practice writing between the lines, copying the directions legibly.” Formal education is juxtaposed against the education of the streets – an education in survival perhaps more utilitarian for a Black boy growing up in Baltimore, though not so in the eyes of Coates. Both of these formal educational spaces failed him: “fear and violence were the weaponry of both” (Coates, 2015).

It was Howard University – the Mecca as he calls it – that is most relished. Coates does not discuss the formal curriculum of the university, as much as the informal curriculum – the opportunity of interacting with and seeing a broad range of diverse Black bodies in one space – the very multicultural nature of the space itself as important: “we were, in our own segregated body politic, cosmopolitans” (Coates, 2015). Learning about emotional and sexual love – including the range of sexual love exercised by peers and professors – gay, bisexual, interracial – was of equal importance to his education at Howard University. 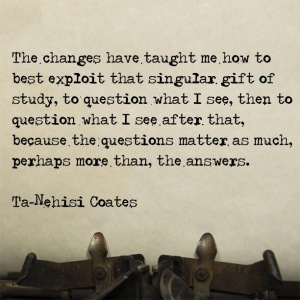 Perhaps most importantly, it was at Howard University that Coates developed his curiosity, his desire to question the world. “The pursuit of knowing was freedom to me, the right to declare your own curiosities and follow them through all manner of books” (Coates, 2015). Throughout the book, Coates imparts on his son the importance of being curious, of questioning, and of understanding “the craft of writing as the art of thinking” (Coates, 2015). He expresses joy in “the singular gift of study, to question what I see, then to question what I see after that, because the questions matter as much, if not more than, the answers” (Coates, 2015).

This quest for knowing is part of the struggle Coates relishes. Like his arguments regarding racial realism, Coates does not operate from a metaphysical perspective. Rather, he is ensconced in being humble before the mysteries of the world and cosmos. Coates recognizes “that this consciousness can never ultimately be racial; it must be cosmic” and that everything we think we know “might be undone by a physics that we do not fully comprehend” (Coates, 2015). This is a physical, quantum worldview (Barad, 2008; Davis, 2004).

Race is not the only Oppression

While Coates certainly interrogates the mythologies of race, built on power structures of domination embedded into the social fabric of the United States, he also carefully articulates the point that race is not the only oppression. Coates speaks eloquently of the need to belong, and how such needs often create oppressors out of the oppressed:

Hate gives identity. The nigger, the fag, the bitch illuminate the border, illuminate ostensibly what we are not, illuminate the Dream of being white, of being a Man. We name the hated strangers and thus are confirmed in the tribe. (Coates, 2015)

Here, I see Coates taking up a nuanced position that is also articulated by scholars such as Charles Mills (1997) or Audre Lorde (1984). “Isms” themselves are the problem – racism, sexism, classism, heterosexism, ableism, ageism. These “isms” create social identity markers that fluctuate throughout time and space. Thus, Coates argues, “I am black, and have been plundered and have lost my body. But perhaps I too had the capacity for plunder, maybe I would take another human’s body to confirm myself in community” (Coates, 2015). This too is a fear and a warning Coates attempts to impart to readers and his son – the sedative of power, so seductive in the structures of society, can easily turn oppressed into oppressor.

The book is filled with commentary on the criminal justice system. Police brutality – the unchecked, unjustified, and unmitigated killing of Black male bodies by police – is discussed throughout the book. Michael Brown and Eric Garner are mentioned, as is Prince Jones – a classmate of Coates’ from Howard University who was killed by a police officer in Northern Virginia. This story plays out heavily in the book – particularly near the end when Coates attempts to reconcile his own feelings about the killing by visiting Jones’ mother. These portions of the book are unapologetic – Coates struggles with the state-sanctioned violence enacted upon Black male bodies. This violence goes beyond police brutality to vigilante brutality: Trayvon Martin and Jordan Davis are also mentioned.

Michael Brown did not die as so many of his defenders supposed. And still the questions behind the questions are never asked. Should assaulting an officer of the state be a capital offense, rendered without trial, with the officer as judge and executioner? Is that what we wish civilization to be?

Coates believes that Michael Brown assaulted the officer who shot and killed him. Yet, the larger question for Coates is not about the guilt or innocence of Michael Brown in this regard. Rather, the question is whether state-sanctioned violence and murder are necessary even in the case of assault. These are the questions Coates is asking readers to deal with. 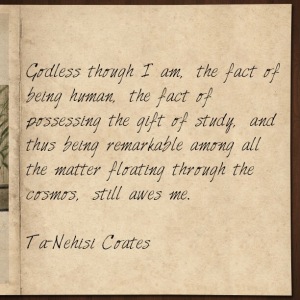 Finally, it is worth noting that Coates is unapologetically atheist. He believes in no God. Certainly this goes for God in the religious or spiritual sense, but I also believe the book goes beyond that. For example, Coates states early in the book that in the United States we have created a God called Democracy: “Americans deify democracy in a way that allows for a dim awareness that they have, from time to time, stood in defiance of their God” (Coates, 2015). This is, in many ways, a book about the false Gods of the United States: democracy, race, capitalism, justice, freedom, progress. The nation’s continued belief in these Gods is, for Coates, highly problematic. Moreover, these Gods and their deification result in material, lived consequences for people in the United States.

Coates, T. (2015). Between the world and me. [Kindle version]. Retrieved from Amazon.com

By Paul William Eaton in Uncategorized on July 18, 2015.
← A Review of “The Rhizome of Blackness” On Bayard Rustin: Why we Need Him Today →