Home » Uncategorized » A Review of “The Rhizome of Blackness”

A Review of “The Rhizome of Blackness”

Several weeks ago I had the incredible opportunity of attending the International Association for Advancement of Curriculum Studies Conference (IAACS) in Ottawa, Canada. While I will be blogging more about the lessons I learned from this experience in the near future, I want to focus in this post about the collision of forces and energies that happen more frequently than we recognize – those moments where seemingly disparate events, texts, and experiences all bloom into onto-epistemological (Barad, 2008), emergent moments of becoming.

The book I discuss in this post, Awad Ibrahim’s (2014) The Rhizome of Blackness: A Critical Ethnography of Hip Hop Culture, Language, Identity, and the Politics of Becoming, provokes, as Massumi suggests above, new thoughts, emotions, and perceptions. The book is a rhizome – not a totally smooth, linear, or predictable examination on Blackness, Hip Hop, Language, or Identity issues.

It is important to provide some context for the nature of this post. First, for the past several months a group of doctoral students and faculty at LSU have been working through Deleuze and Guattari’s (1987) book A Thousand Plateaus. This is a challenging philosophical text – and during our annual Curriculum Camp conference at LSU in February, our scholar in residence Alecia Youngblood Jackson suggested the concept of co-reading: reading a complicated or heavily theoretical/philosophical text, such as Deleuze and Guattari, alongside another book that has employed those concepts in theoretical constructions or analysis. Our group started this approach, co-reading Kaustuv Roy’s (2003) Teachers in Nomadic Spaces: Deleuze and Curriculum.

I had the great fortune of running into to Dr. Ibrahim during IAACS, and during our conversation this idea came up. I mentioned our reading group, and Dr. Ibrahim mentioned he just happened to have published his book employing Deleuze and Guattari’s concept of the rhizome. Here, forces collided, the world emerged, in perfect timing. I immediately picked this book up, and have been engaging it for the past several weeks as a personal co-reading project.

In addition, I attended a session at IAACS on the importance of study. In that session, one of the presenters discussed the monastic study tradition, particularly the importance of engaging a text. Her contention was that a text is not really read until one responds to it through writing or talking through the ideas, emotions, sensations, and changes in perceptions it invokes. This is reminiscent of Massumi’s idea, quoted at the start of this post, or Jackson and Mazzei’s (2012) conception of “thinking through.”

Being and Becoming Black

Ibrahim’s discussion focuses on the construction of Blackness amongst continental African immigrants and refugees in Canada. Ibrahim’s book is critically important for educators and those interested in social constructions of Blackness in society (sociologists, anthropologists, historians, racial and gender studies). This book is particularly relevant for educators in the United States, for reasons that will be evident below.

By addressing the processes non-native African Canadians go through to become Black, Ibrahim sheds light on the critical issues facing students who immigrate or are forced to seek refuge in a foreign, predominantly White country. In particular, Ibrahim’s analysis dissects the difference between being and becoming – noting that non-native African immigrants are forced to be Black in a society structured around White racial dominance; and that they must also become Black – learning to assemble their own relationship and understanding of Blackness. Ibrahim believes it is largely through Hip Hop culture and multilingual code-switching that the students in his study become Black – a process he refers to as construction of a rhizomatic identity – an assemblage. Here, Ibrahim is borrowing heavily from the language of Deleuze and Guattari’s (1987) conception of rhizomatics. 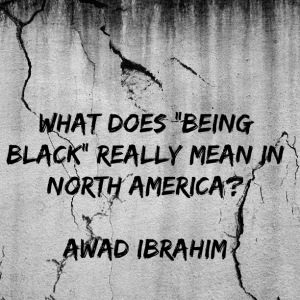 More importantly for me, however, is Ibrahim’s discussion of how racial constructions from the United States shape the experience of becoming Black in countries outside the United States. I have been thinking about this issue a lot, particularly during my time in Santiago, Chile this month as part of LSU’s Geaux Global initiative.

As educators, we need to ask critical questions not only about how one becomes Black in the United States, but also how our country, and its ideas, ideologies, and history of race, racism, and striated (Ibrahim, 2014) constructions of racial ‘identity’ are exported around the world, consumed and appropriated by youth and people of all colors. As we struggle to deal with ongoing racial strife in the United States, particularly around issues of Blackness (evidenced most recently by Rachel Dolezal, Charleston, and countless other examples), we should not only be concerned about the impact of our constructions of race in the United States, but around the world.

In my dissertation (Eaton, 2015), I engaged the concept of becoming – viewing technologically mediated identities/subjectivities on and through digital social media as an emergent phenomena – drawing on myriad concepts from complexity theory, postqualitative theorizing, the new materialisms, and Karen Barad’s onto-epistemological theory of agential realism. Philosophically, I argued that college student educators are limited by our language and theorizing about identity due, in part, to issues of language, and hidden assumptions (Slife & Williams, 1995) behind much of our research on college student identity/development.

I proposed, and still contend, that we may benefit from an entirely different language to begin discussing issues of identity and subjectivity in the study, teaching, and learning about ‘identity’ and subjectivity with college students. In fact, we may benefit from not talking about identity at all – for identity assumes an essentialized and static self – a conceptual framework that has led to many difficulties in our educational and social systems. I’ve begun more critically engaging those scholars who might give us or assist us in acquiring a new language – for example, Rosi Braidotti (2013), Gert Biesta (2014), ‘Eastern’ philosophers (Eppert & Wang, 2007), and posthumanist theorists (Snaza & Weaver, 2014).

Critical Concepts from The Rhizome of Blackess

I add to this list Dr. Ibrahim’s book and scholarship. Aside from the critical and thoughtful examination of Blackness articulated in his book, Ibrahim provokes additional thoughts and advances perspectives critical to those of us interested in researching issues of identity and subjectivity. Here are some of these critical ideas.

Ibrahim clearly situates this book as one arguing against the rigidity of Blackness as socially constructed, and in much of the text he is critical of how schooling advances striated notions of Black identity (lack of racial diversity in teachers and administration, lack of curricular resources, and tracking African immigrant and refugee students into specific, less challenging curricula, thus impacting their career possibilities and sense of self).

Throughout the book Ibrahim refers to three school sites where his study took place. His pedagogy of the imaginary appears to be in direct response to the one site where he draws most of his examples – a school called Marie-Victorin (MV). This school is described throughout the book as striated, and is set in juxtaposition to the other two schools – Sunnyside and Maxwell High, which are described as smooth. At MV African Canadian students have less freedom to live in the rhizomatic third space, and the school contributes to this problem for many of the reasons cited in the previous paragraph.

Question: Should Ibrahim have utilized ‘Identity?’

Ibrahim notes that “Deleuze and Guattari do not use the term identity. They prefer assemblage” (p. 52). Ibrahim also spends considerable time in the book discussing how language shapes the world, and I agree with this contention. Thus, I take some issue with the continued use of ‘identity’ in Ibrahim’s framing of becoming. Situated in the context of Deleuze and Guattari, I believe that ‘identity’ becomes too striating – restrictive in terms of becoming, particularly in relation to Blackness.

Ibrahim’s use of identity is partially justified. In seeking to frame the difference between being and becoming, and to introduce discussions of power associated with striated definitions of Blackness as represented in Canadian society and exported Hip Hop Culture from the United States, Ibrahim (2014) attempts to argue that students in his study are living in-between: becoming Black as they navigate “between striated and smooth spaces” (p. 52). Here, we might argue that Ibrahim associates Identity with Striation and Becoming with Smooth spaces, as discussed by Deleuze and Guattari.

However, this argument is not entirely convincing as presented in the book. The many examples provided by Ibrahim of how students in the study become Black appear to adhere more to striated representations of Blackness rather than in-betweeness outside normative identity constructs. This is partially due to Ibrahim’s overreliance on examples drawn from Marie-Victorin (MV), and inadequate examples drawn from Sunnyside and Maxwell High.

This reading of the text undermines one of the central arguments in the book – that striated definitions of Blackness as an identity restrict the multiplicity of what it means to become Black by ignoring the range of Black experience(s), language(s), arts, culture, and diasporic roots. In other words, Ibrahim’s examples from students in the study (drawn almost entirely from MV) fail to actualize the idea of becoming Black in favor of being Black. He says as much in his conclusion: “African students appear to have fallen prey to fixity, which imposed on them the already established North American order, discourse, and historical representations of Blackness” (p. 210).

The central question here is: If becoming is unpredictable, unfinished, and horizontal, then how have the African Canadian students in the study moved beyond territorialized, rigid, vertical notions of identity? To return to the original point, I believe the problematic here centers on use of the word identity in framing rhizomatic identity. As I discussed in my dissertation (Eaton, 2015), identity is a constricting word – it territorializes and presupposes essentialized, static, vertical, predictable patterns. This is why I continue to avoid using the word in my own scholarship.

I believe this problem could have also been avoided in the book had more examples been drawn from students at Sunnyside and Maxwell High. Ibrahim identifies both of these schools as the “smooth” spaces, where becoming Black is more evident. Thus, readers may have benefited from having more examples from these students to offer counter-perspectives on the processes of becoming.

Summarizing, this book is important reading for educators – particularly those interested in issues of ‘identity,’ subjectivity, and social/discursive constructions around race/Blackness. By harnessing a variety of theories, as well as examining the expriences of African immigrants and refugees in the Canadian context, the book complicates rigid readings of Black identity. Importantly, Ibrahim draws on concepts from Deleuze and Guattari, particularly the notion of the rhizome, to expand our philosophical, theoretical, and discursive approaches to research and teaching about race. In my own personal quest for new language and patterns of thought, I believe this book provokes new thought, raises important questions, and advances a discourse on Blackness and race at a critical moment.

Ibrahim, A. (2014). The rhizome of blackness: A critical ethnography of Hip-Hop culture, language, identity, and the politics of becoming. New York, NY: Peter Lang.

Massumi, B. (1992). A users guide to capitalism and schizophrenia: Deviations from Deleuze and Guattari. Cambridge, MA: MIT Press.

By Paul William Eaton in Uncategorized on June 26, 2015.
← Notes from Santiago: 6.7.15 Ta-Nehisi Coates: Racism, Social Commentary, and the Question of Atheism →