Near the conclusion of her book On Being Included: Racism and Diversity in Institutional Life, Ahmed discusses her encounters with ‘critical’ white (queer) scholars: “I should note as well that I have experienced the most defensive reactions to such points from white male academics who think of themselves as critical” (p. 179). The ‘points’ to which Ahmed refers are the ways female, queer, scholars of color, such as herself, must continuously point out to white male (queer) academics their complicity in perpetuating racism within the institution. The examples she provides include all-male reading lists on syllabi; the selection of campus speakers who tend to be white males; ‘open’ calls coordinated by white males that seem to ‘invite’ women of color scholars to be part of the conversation; the ways that people are named, introduced, and discussed (Professor Ahmed vs. Sara).

The necessity of continuously bringing up these conversations is what Ahmed refers to as “insistence” labor; or, what makes one a “killjoy” by destroying people’s perceptions of self and institutional life. We must continue to point out institutional racism because universities have devised clever means by which to cover over and ignore racism. Discourses of diversity, criticality, and commitment are chief tools in how universities, and the people within universities, have avoided dismantling systemic, embedded, institutional racism.

In an important footnote to this passage, Ahmed refers to defensive reactions by white academics as “‘critical sexism’ and ‘critical racism’: the kind of sexism and racism reproduced by critical subjects who do not see the reproduction because of their self-assumed criticality” (p. 217). The point Ahmed is making centers on complicity: “when criticality becomes an ego ideal, it can participate in not seeing complicity” (p. 179). Ahmed brings in not only white academics here, but also white queer academics. She unpacks the particular ways that queerness provides what I call a cover (drawing on Kenji Yoshino’s discussion of covering) for white academics to avoid dealing with complicity in institutional racism. Queerness as a minoritized identity status becomes a way of avoiding responsibility for racism by white queer academics.

I am a white queer academic. To begin unpacking Ahmed’s text, I began (re)thinking about what ways I am complicit in perpetuating institutional racism. This is not the first time thinking through this issue. I co-presented a paper this past April at the American Educational Research Association conference on this very topic.

Theoretical Bases of my Research

Ahmed closes her book by discussing the ways that new critical theory turn away from explicit discussions of racism (and likely other isms) by purporting to move beyond identity categories. These theoretical bases have and continue to largely undergird my own thinking about issues of identity and subjectivity with college students and higher education professionals: Deleuze; Guattari; Braidotti. Assemblages, nomadism, becoming.

There is a certain “hope invested in new terms” (Ahmed, 2012, p. 180) such as these. The hope is that we might “‘get beyond’ categories like gender and race: as if the categories themselves have restricted our understanding, as if the categories themselves are the blockage points” (p. 180). Ahmed did not need to point this out to me. Having taken up and been immersed in these new languages, these theoretical and philosophical perspectives, I was already quite aware of the limitations of these ways of thinking. Like all theoretical concepts, assemblages, nomadism, and becoming insert cuts into the world. They both produce the world, and also serve as ways of not producing the world. This is what Ahmed refers to as a non-performative. Just because we say something does not make it so. In fact, saying it may actually make it less likely to come into reality.

I have spent more than my fair share of hours immersed in reading and writing about concepts such as assemblages, nomadism, and becoming thinking ‘this is racist.’ Like much of her book, Ahmed does not suggest that we give up new theoretical languages or discourses; rather we need to critically interrogate how the “hope invested in new terms can mean turning away from social restrictions and blockages by identifying restriction and blockage with the old terms that we need to move beyond” (Ahmed, 2012, p. 181). In other words, we should not blame the old terminology or concepts for blocking the system. In taking up the new terminology, we should look for how it might be the blockage by avoiding discussions needed to address institutional racism because it turns away from discussions of institutional racism. We must also take up scholars who use the new terminology productively toward ends of addressing these blockages (in the case of assemblage theory, for example, she cites Puar (2007); I would add to this list Weheyliye (2014)).

The more overarching message emerging from thinking about Ahmed’s text is how ‘critical’ white (queer) academics such as myself, even when we feel ‘comfortable’ talking about race, are actually petrified of talking about Whiteness. This makes discussions of and about dismantling institutional racism almost an impossibility. Part of why this occurs is because ‘critical’ white (queer) academics immediately become defensive if you point out their complicity in racist structures of institutions.

Challenging ‘critical’ white (queer) academics on their complicity in institutional racism is felt as personal injury: “when individuals have an idea of themselves as progressive, they might be more likely to hear the critique of racism as self-injury (as injuring their sense of themselves as progressive)” (p. 209); this is white fragility. Here is the word ‘progressive,’ another term I use to describe myself. There are a lot of lessons about the 2016 political season in this book (a topic for another post), but I must question whether the term ‘progressive’ is also becoming a non-performative – in politics and scholarship. 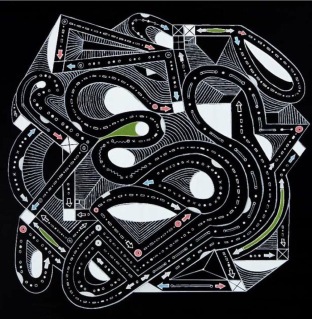 More importantly, however, is thinking about how I, personally and as a ‘critical’ white (queer) academic, often turn away from talking about Whiteness. This turning away makes me complicit – it makes me a blockage in the system. I can and should be doing more to move through this blockage – the way I am complicit in being a blockage in the system of fighting institutional racism – even if that comes with feelings of guilt, stress, or depression. Only by thinking and talking about myself as institutional blockage to dismantling institutional racism can we actually begin to work on the dismantling.

By Paul William Eaton in Reading Reflections on June 27, 2017.
← Faculty Chronicles: Working Through my new Fear of Writing What the World Needs Now: Elif Shafak’s “The Forty Rules of Love” →