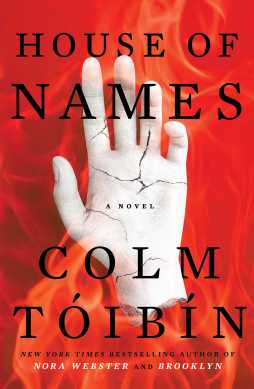 Reading Colm Toíbín’s House of Names was like returning to an old friend. In high school, some of my very favorite books and plays were those of the Greeks. The Odyssey, Oedipus Rex, and The Frogs – well, these dramas and epics transformed my worldview, making me fall in love with narrative and literature in new ways (Oates & O’Neill, 1950). I largely credit these discussions of classic texts with my decision to pursue a degree in English as an undergraduate. Our teacher – Cathy Morrics – she knew how to bring these stories to life and make them relevant.

So last month, hearing Toíbín speak about his book during the Inprint Houston Margarett Root Brown Reading Series; well, I was enraptured and ecstatic to read this retelling of the drama of Agamemnon, Clytemnestra, Iphigenia, Electra, Orestes.

One need not be familiar with the original epics or tragedies to find Toíbín’s novel accessible. This tale has everything a modern day political junkie (think House of Cards) or murder-hungry reader desires. Treachery, revenge, grudges, distrust, bonds of loyalty, family drama, alliances formed, alliances broken, war, emotional distress, and deep questions about the psychological nature of human agency. The book is a literal page-turner, so adept and smooth is Toíbín’s storytelling. “We are all hungry now. Food merely whets our appetite, it sharpens our teeth; meat makes us ravenous for more meat, as death is ravenous for more death” (p. 3); or so Clytemnestra narrates to us on the opening page of the book. Thus begins the partial retelling of the original epics and tragic dramas.

The novel unfolds in a series of voices – the narration moving between first person (Clytemnestra) and third person (Orestes; Electra), and I find this a useful device in the novel. One learns the story through multiple perspectives. This is one way Toíbín invokes the book’s title. More on that later.

However, the bulk of the novel is Toíbín’s imagining the story of Orestes – who is largely left out of the epics and dramatic tragedies of the Greeks, except in fulfilling his role of carrying out the murder of his mother, supposedly for killing his father. Toíbín has a slightly different take on what motivates Orestes to murder his mother, which requires some unpacking of what I find to be the particularly beautiful part of this novel.

Orestes and Leander – A love story

Following the murder of Agamemnon, Orestes is kidnapped and taken far from the palace – this much we know from the epics and Greek tragedies. But the long years between this kidnapping and Orestes ultimate return is the true story of Toíbín’s novel, and it is here we find a love story.

Soon after being kidnapped, Orestes manages to escape with two other boys – Leander and Mitros. They soon find shelter in the home of an old woman – an oracle-like figure in the novel – and grow from boyhood and through adolescence. While the story is largely filled with the mundane everyday activities – farming, caring for the old woman, and protecting themselves from being discovered – Toíbín also weaves a beautiful love story, ever so subtly, into the text.

Their love blossoms slowly in the book:

When Orestes glanced at Leander, it seemed he had grown older. His shoulders had widened and his face had become more narrow and thin. He appeared taller too as he stood along in the shadows. For a second, Orestes was tempted to cross the room and touch Leander, put his hand on his face or on his torso, but he stood still. (p. 127)

The two companions and exiles find moments of solitude for their own mental health: to think, to find some solitude. They each climb down a rocky cliff at points in the novel to watch the waves, and in one instance they go together: “Orestes lay back and leaned his head against Leander’s chest as Leander put his arms around him and held him” (p. 131).

Soon Orestes and Leander are alone – both the old woman and their companion, Mitros, have died. Their love grows in these years together. “He stopped going to his own bed, waiting instead until Leander was ready for bed and then going to the room with him. . .He began to look forward to the night, to what happened between them in these hours” (p. 141).

What happens to Orestes and Leander shifts once they leave the house to return to the center of power/the palace. Leander homesick for his family, Orestes less so. What is evident in the subtlety of the plot and the untangling of their intimacy is Orestes’ sadness at losing Leander.

Leander walked alongside him, linking arms with him, catching his hand at times and holding it. . .it was perhaps a way for Leander to tell him that they were together now but would soon be apart, that what had happened between them in the old woman’s house would not happen again. (p. 190).

While I do not wish to give the plot of the book away too much more – this love between Orestes and Leander – and how it is treated by Toíbín is a work of narrative genius. This is due to its subtlety. In other words, this novel is not truly a gay love story in any strict sense of form or fashion. However, Orestes’ character is deeply enamored of Leander, and the conclusion to the novel left me questioning the role of love in this entire novel.

Does love always betray? This appears to be a theme Toíbín plays with, not only in the relationship between Orestes and Leander, but with many characters in the novel. Agamemnon and Clytemnestra; Agamemnon and Iphigenia; Clytemnestra and Orestes; Aegisthus and Clytemnestra. Or, does love only betray when power is involved? These are questions to ponder as one reads the book.

The book’s title is illustrative of several important thematics to the book. One centers the destruction of war, often in areas far from centers of power. The old woman with whom Orestes, Leander, and Mitros stayed for many years often told stories. In one instance she discussed her own family: “This house was filled with names” she says. Her sons have gone off to fight the war. The countryside is desolate, deserted, and destroyed. “The houses were all filled with names” the old woman laments. It is tragic commentary on the human costs of war. Homes, once filled with joyous names, are now devoid of names. Empty. Ramshackled. Only memories of names remain.

But the second is the power of the dead to influence the actions of the living. Whose names are invoked in going to war? What ancient betrayals continue to influence the living? As Electra states to Orestes, they live in “a house of whispers” (p. 223) and one “must learn to listen” (p. 223). This brings into the novel the mystical, mysterious, and unknown world of the dead.

Ghosts roam the halls of the palace, influencing the human characters that are alive. Where we live become houses of names – those living and dead. In this sense, the novel’s larger questions about human agency emerge. Is it the Gods? One God? Ghosts? Memory? Or are we the sole actors in our decisions? Clytemnestra dictates: “In the future I would be the one to decide what to do, not the Gods” (p. 37) – but also states at several points “I have no choice in this” (pp. 27-28). Do humans really possess agency? Toíbín asks us to consider such questions (which he discusses in his talk at Inprint).

If you read the book, there are some other central questions that might be worth considering. These all appear as important themes or points of discussion in the novel.

A word occurred to me, a word of which I was sure. It was the word ‘dream.’ Once the word came I knew what ‘dream’ was or had been, and I was certain then that I was not dreaming in this nullness, that none of what is happening is a dream; it is real, it is actual.

And then other words appeared like stars in the darkening sky. I became desperate to take possession of each one, but I could not hold on to them. They were falling or glittering or moving farther away. (p. 241)

To conclude, this novel possesses strong character development, particularly in the first half of the text. The story is riveting, and en route to a rather complicated and contentious conclusion to the book (which led to quite the debate at our Inprint Book Club), Toíbín explores some rather complicated human issues that, even after all these millennia, we still have not resolved. Love. War. Murder. Treachery. Power. And the costs each of these impose onto the life of mortal humans.

By Paul William Eaton in Book Talk on June 12, 2017.
← Race in a Changing Society: Paul Beatty’s “The Sellout” In God or Man’s Image? Cormac McCarthy’s “Child of God” →