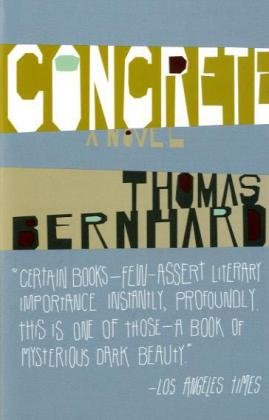 Thomas Bernhard’s (1984/2010) Concrete is a vitalist antidote to present-day conditions. Late in the book, the narrator and central character Rudolf, states: “The fact is that we immediately use someone who is still more unfortunate than we are in order to get ourselves back on our feet” (p. 154). The question that comes to my mind is: how can we use Rudolf’s seemingly desperate situation to get back on our individual and collective feet?

The book read for me as a philosophical treatise on realities of life – I experienced the novel viscerally. It is the first stream-of-consciousness novel I have read where I felt fully immersed, written so eloquently that I felt as if I was in Rudolf’s head, experiencing Rudolf’s lived reality. This viscerality comes from the realist edge of the novel: everything that is good is also bad; everything easy is also hard. We do (not), as individuals, necessarily have agency in deciding these realities – they shift from moment to moment, dependent on tiny fluctuations in the weather, the arrangement of material objects, physical geographic location, and memory (which also makes it a post(y) novel – for all my colleagues working in the posts of educational research). It is a both-and novel, not a novel of either-or. For me this is at least part of its nature as an antidote to present-day conditions. We collectively need much more both-and thinking.

The Rigors of Intellectual Life and Writing
This book was also profoundly moving for me as an academic and intellectual because the narrator positions himself as a musicologist struggling with the difficulties of life as a writer. In this sense the novel offered me more than several clarifying ontological and visceral moments. I drew on Rudolf’s well-articulated stress to imagine the possibilities of even sitting down to write this blog post.

Rudolf is a self-taught academic and intellectual, interested in musicology, the mathematics of music, and European classical musicians. A central running theme of the book is Rudolf’s inability to start writing about Mendelssohn – a task for which he has been preparing for over ten years. He is well-read on Mendelssohn; he possesses stacks of books, articles, and notes. He has completed his archival research. He spends great time imagining writing, but is incapable of beginning. I know few academics or writers who have not found themselves in these positions:

Here I will read some excerpts from moments I found particularly visceral in narrator’s accounting of the difficulties of writing:

On Tricking Ourselves into Writing

Rudolf also writes about the crushing pressures that accompany intellectual work and the writing process. There are beautiful passages about getting caught up in side projects that distract us from larger projects; or writing work that we feel to be intellectually void, lacking in superiority, and not worthy of being read by others. In the novel, Rudolf destroys much of this writing: burning it, purposely losing it, or keeping it locked away from the consuming eyes of others.

The book also becomes humorous, examining the publishing process. Why do we publish our work, Rudolf philosophizes? “We publish only to satisfy our craving for fame” (p. 34). Those who write and publish are narcissists Rudolf seems to suggest. This is quickly countered by thoughts on producing intellectually rigorous work – the importance of engaging in the act of creating new knowledge and sharing it. This is one of those both-and moments of the novel – and the philosophical inquiry into the absurdities and necessary nature of publishing seems particularly poignant and thought-provoking for anyone engaged in writing or intellectual pursuits.

But what I found refreshing for me personally – and what I think might resonate with others engaged in any form of writing – is just the complexity of the writing process itself.

When we have sentences in our heads we still can’t be certain of being able to get them down on paper, I thought. The sentences frighten us; first the idea frightens us, then the sentence, then the thought that we may no longer have the idea in our heads when we want to write it down. Very often we write a sentence down too early, then another too late. (p. 151)

The very nature of this long internal discussion on writing and being an intellectual jolted me into action. I wanted to write about the viscerality of reading this book because, having just returned from an academic conference where on more than several occasions I had discussions about becoming “unstuck” in our academic writing, the ability to connect with Rudolf’s frustrations seemed to help me get back to my writing (as did connecting with colleagues at the conference). In other words – Rudolf’s frustration and inability to produce, though fictional and terrible, has helped me overcome a bit of writer’s block I myself have been feeling.

Politics
The resonance this book offers with the current political situation in the United States (and arguably, worldwide) makes it worth the read. There are scathing and poignant critiques of capitalism, socialism, and the media. While the book appears to take place in a post-World War II era, these passages on the absurdities of the political process are the antidote we might need to get on our collective feet in an era of politics gone awry. Quite clearly this suggests – we’ve been here before, and while things feel particularly difficult in the present moment, they have always been difficult simply because the world is absurd.

Rudolf describes the terrible political conditions of his country, which he longs to leave: “political and cultural conditions have of late become so chaotic that they turn my stomach when I wake up every morning, even before I am out of bed . . .indifference to the intellect has long since ceased to cause the likes of me to despair, but if I am truthful only to vomit” (p. 61). Is Rudolf not describing the United States in 2017? Our political disaster is causing people to become physically, emotionally, and spiritually ill.

Rudolf discusses the issues associated with charity and the eradication of poverty: “The world is so rich that in fact it can afford anything, but this is prevented by the politicians who rule it. They cry out for aid, yet daily squander billions on arms alone” (p. 41). Indeed we find ourselves in the same position today. As politicians in Washington call for the eradication of poverty, they also sign multi-billion dollar arms deals with foreign nations.

What counts as truth? This is certainly a question in the United States at present, but also for Rudolf’s world: “truth is trodden underfoot, and lies are sanctified by all official organs as the only means to any end” (p. 62). This is coupled with unapologetic critiques of the media throughout the novel. Rudolf despises the media, yet cannot “escape from the newspapers because, despite everything, I have a compulsion to devour this journalistic dirt every day” (p. 83). Who living in the world today cannot relate to this sentimentality?

In other words – this is a sort of dystopian novel in terms of its subtle political commentary – “virtually the only people in power are blustering illiterates” (p. 63) – and such dystopian novels can sometimes wake us from our collective slumber, helping us to get back on our collective feet (it is no coincidence that 1984 and The Handmaids Tale are currently enjoying a resurgence in popular culture and imagination).

Post(y)-ness
I cannot help but discuss the importance of “concrete” objects in this novel. “Concrete” itself only features into the novel near the end. However, material objects become critically important to Rudolf’s experiences in some particularly important ways.

For example, there is throughout the book a photograph or painting of Rudolf’s maternal grandfather. The maternal grandfather appears central to the story – and if you are not paying attention to the nuances of this book one can almost gloss over this detail. However, this painting comes up in fleeting fashion throughout the novel as Rudolf reflects on how he got to this agitated state of unproductivity. The maternal grandfather’s experiences in the war, in pushing and encouraging Rudolf to travel and pursue his interests, seems particularly important, and might be an interesting point of discussion for individuals discussing the book, or simply thinking about the book’s larger messages.

This ties directly to Rudolf’s mother. There is a particularly poignant moment in the novel where Rudolf is discussing the importance of fabrics and clothing to our memory:

If we lose someone we love, we always keep some garment that belonged to them, at least as long as it retains their smell, in fact as long as we live, because we go on believing that the garment brings back their smell, even when this has ceased to be anything but pure imagination. For this reason I still have one of my mother’s coats, though this is a secret I’ve never divulged to anyone, not even to my sister. She would have simply made fun of it. My mother’s coat hangs in a wardrobe which is either otherwise empty and which I keep firmly locked. However, never a week goes by but I open the wardrobe and smell the coat. (pp. 95-96)

There is a strong undercurrent in this novel about the role of memory – and how memory is tied to physical objects, environments, and music. The question becomes – what makes a memory? How do physical objects invoke our memories to particular places and times? The coat is a particularly poignant moment where Rudolf shows some of his more sentimental and emotional side – his attachment to other people that he spends much of the novel negating.

This coat is certainly not the only object with such power in the novel – chairs, in particular, are important. Near the end of the novel, a wicker chair invokes a memory that leads to the novel’s conclusion. But physical objects such as wardrobes, books, and suitcases – all of these are particularly relevant to the novel’s overall flow and are worthy of considering for the agency they possess over Rudolf, as well as the story’s unfolding.

So, too, is music. Sonic forces are present throughout the book and two pieces of music in particular are mentioned. Mozart’s Haffner Symphony and Mendelssohn’s The Traveling Players. Both are worth a listen as you read these parts of the novel where they are mentioned.

Philosophical Questions
To close, I want to point out some other great philosophical questions that come up throughout the novel:

Closing Thought
This was my first introduction to Thomas Bernhard’s work – and I am compelled to read more. Although this was not a book I originally voted in favor of for our Brazos Book Club, this was a tremendously good read and I highly recommend others read it.   This appears to have entered my life as many books do – at exactly the correct moment.

By Paul William Eaton in Uncategorized on May 22, 2017.
← Forget or Remember? Rabih Alameddine’s “The Angel of History” Race in a Changing Society: Paul Beatty’s “The Sellout” →