Starting with Dewey: Education as Science or Art

Educators should read more philosophy. This mantra influenced my decision to begin this semesters master’s seminar on Research in Higher Education with John Dewey’s (1929) The Sources of a Science of Education.

Dewey’s arguments in this short book center on whether education is an art or a science.  The book opens with an important question: 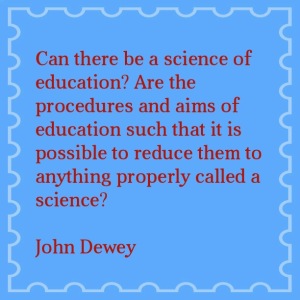 “Can there be a science of education? Are the procedures and aims of education such that it is possible to reduce them to anything properly called a science?” (Dewey, 1929, “Education as a Science,” para. 1).  This is followed by what appears to be Dewey’s (1929) fairly unequivocal statement that education is not a science: “That, in concrete operation, education is an art, either a mechanical art or a fine art, is unquestionable” (“Education as an Art,” para. 1).

This book is particularly powerful because Dewey frames the often dualistic debate of education as art or science in non-oppositional terms.  “There is no opposition,” states Dewey (1929), “although there is a distinction” (“Education as an Art,” para. 1).  Education is not either an art or a science (an either/or proposition) but rather both an art and a science (a both/and proposition).

Thinking with Science in Artful Practice

Being thoughtful in the application of science to practice is particularly important. One of the most powerful aspects of this book is Dewey’s belief that an over-reliance on science in education promotes educators who do not think.  Science, Dewey (1929) states, is impatient, edging toward “procedures that yield immediately successful results” (“Education as an Art,” para. 3). When one study finds results there is a rush to “convert scientific conclusions into rules and standards of [educational] practice” (Dewey, 1929, “Experience and Abstraction,” para. 3).  He goes on to refer to this as a desire for “recipes” in education.

Rather than blindly acquiescing to scientific findings, Dewey challenges educators to use research for reflection and observation within their own artful practice. We should ask whether results match up to our educational environments or the students we work with.  “A certain amount of downright thinking going on in the head” (Dewey, 1929, “Arm-Chair Science,” para. 1) is more important than simply applying rules or recipes to educational practice.

School administration and instruction is a much more complex operation than was the one factor contained in the scientific result. The significance of one factor for educational practice can be determined only as it is balanced with many other factors. (“Experience and Abstraction,” para. 5)

Failure to account for the multiple factors that influence education as practice and art results in unethical practice.

Dewey (1929) does not use the word “ethics” in this text. However, this book is entirely about ethics.  Balance is key in educational practice. We need science; research across multiple “sources” of science help us better understand educational processes, administration, and students.

Yet Dewey (1929) cautions that becoming too focused on “science” destroys the ethical foundations of education.  This can occur in several ways: by seeking recipes and best practices applied as “law,” destroying educators’ ability to think; by practicing selective “science” – such as quantitative statistical procedures, that ignore the qualitative, emergent, or philosophical nature of the world.

These dangers, when enacted, can lead to education that is overly-objectified, rigid, and dehumanizing. Rather than viewing education as process, we de-value education based on some outside objectives, what we refer to presently as “learning outcomes.”  Dewey (1929) states “the belief that social conditions determine educational objectives. . .is a fallacy. Education is autonomous and should be free to determine its own ends, its own objectives” (“Educational Values,” para. 1).  Education loses its creative potential precisely when over-application of science, codified as rules and procedures, limit educator and student ability to negotiate education as process, as experience.

It could be argued this is what has happened to education today in the United States (and elsewhere globally). Hyper-focus on “outcomes,” “measures,” and “assessments” has stripped education of its creative, humanizing, philosophical potential.  We seek the ends through codified means – rather than viewing means and ends as entangled.  “There is no such thing as a fixed and final set of objectives,” Dewey (1929) states (“Educational Values,” para. 2).

Education today is out of balance; this is what Dewey warned against in The Sources of a Science of Education.

Application to Research in Higher Education

Exposing emerging scholar-practitioners to these philosophical questions is important in achieving a correction to this imbalance. Each student-speaker in the seminar wrote a response to Dewey, and their responses are insightful.  While some simply struggled with the ideas in the text, others commented on issues with assessment of faculty and learning through end-of-term evaluations or the shifting nature of “scientific” understanding in hard sciences such as biology.  Some took particular stances – viewing education more as art or science.

Helping students think about research differently is important. Rather than diving right in to teaching methods, literature reviews, or how to read research articles, it is important to expose emerging scholar-practitioners to understanding the ethics of using research in practice.  Dewey’s (1929) text, by embracing a both/and approach, recognizes the importance of science to reflective, artful practice.  Further, Dewey articulates the importance of being versed in many scientific sources – biology, psychology, sociology, philosophy, and many others.  This is what Scott (2009) calls epistemological multilingualism.

Yet, Dewey also reminds us that practice is research. It is our practice where we apply science, but also where new questions arise.  It is necessary for emerging scholar-practitioners to see themselves as researchers – which means applying science reflectively to practice as well as thinking about practice as research. As Dewey states, “Education is by its nature an endless circle or spiral. It is an activity which includes science within itself.”  Yet, use of science should not bend toward rules or recipes, since “discovery is never made; it is always making” (“General Conclusion,” para. 1).

We must seek balance in education. Both/and, not either/or. Doing so will help us “render the performance of the educational function more enlightened, more humane, more truly educational than it was before” (Dewey, 1929, “General Conclusion,” para. 1).

Dewey, J. (1929). The sources of a science of education [Kindle Fire Edition]. Retrieved from http://www.amazon.com